The bio-toy project was designed to allow a student to create a three-dimensional work of art based on the limited impressions of another student’s autobiography.

The toy should not be bought. Any safe materials may be used to create the toy and resources or small objects may be purchased to complete the design. Creativity is highly encouraged.

Each student’s autobiography will be written in class, within a short, 15 to 20 minute time-frame. The statement should be two or three paragraphs, including some background information, likes and dislikes and future plans of desired places to go or things to do.

There’s a wolf spider living in the corner of my house. Whenever I draw near, she scuttles into the cracks of the siding and waits until I’m gone. I think we tend to get along well, if only because we have some things in common. Wolf spiders are the shyest of their species – they dislike being around others and will often escape quickly when approached. It’s like they have a social phobia. Oh, I’m familiar with that, more than I’d like to be. Spiders are wonderful creatures and I love them. I’ve often adored many things that others tend to fear. I sometimes consider myself a spider. Crafting an intricate web of a strong façade, a mask, and lying in wait, hiding in the corners, hoping a nice little fly may come to pay me a visit.

Of course, unlike the spider, I won’t wrap you up and save you for dinner.

This autobiography instantly brought to mind a mask, both metaphorical and literal. I was torn between a couple of options for creating a mask of which my recipient could hide behind, remove or even a little of both. If I included a full mask with a securing band it may suggest that wearing the mask was preferable to facing your fears. A half-mask was strongly considered as its properties of only concealing a portion of the wearer’s face could suggest a partial hiding away or merely hiding from some fears, while facing others. I chose a full mask with no binding ties to indicate that, when needed, the mask could be worn for safety or avoidance but only temporarily. This mask would need to be consciously worn and would take effort, hopefully encouraging the wearer to wear it less as fears were faced and trials overcome. It would always be available, however, on those occasions when everything seemed too much and a shelter was required. With any luck, one day the mask would hang on a wall and be a gentle reminder of the strength the recipient would eventually find by both wearing the mask and, more importantly, removing it.

Obviously, the mask needed to resemble a wolf spider and there are many versions: some ugly and scary, some cute and fuzzy, some seem large and menacing while others are small and unassuming. I chose to go with soft and cuddly selection, even if no one would truly want to embrace a spider, a stuffed animal version came to mind. I gathered a few pictures of the variety I was interested in replicating from a couple of angles to visualize some aspects of the spider I wanted to incorporate into my design: legs, eyes, pelt, etc. 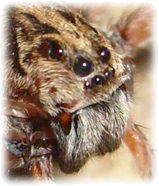 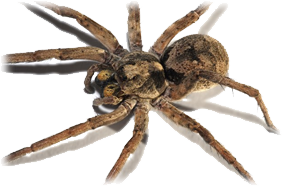 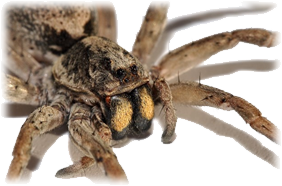 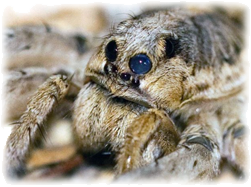 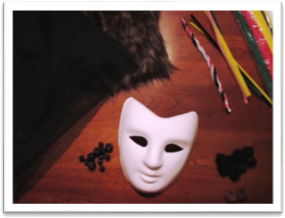 I began by gathering supplies. I already owned some pipe-cleaners and pom-poms and a flimsy mask template but I knew I needed quite a few more things to complete the project. While browsing a craft store for additional materials, I ran across a perfect sample of fur in the fabric department and nearby I acquired a sturdy, hardier mask of paper-mâché. I knew I’d like to find a material to cover the eyes of the mask that was still transparent enough to see through so the mask would be functional, even though it was being designed as a decorative item. I searched for a stretchy, nylon material but was unsuccessful in finding something appropriate; but as I looked, I found a string of beads that would suite nicely for the eyes of the spider. A quick trip to a nearby fabric store presented me with a thin, mesh material that I felt could be layered until it was dark enough to provide the desired effect.

First, I needed to cover the mask with several layers of the mesh material to ensure the eye socket effect was produced. I cut my fabric into four equal squares, appropriately sized to encompass the entire surface of the mask. Next, I used rubber cement to affix each layer tightly across the eyes and pulled taut from the forehead to the chin. 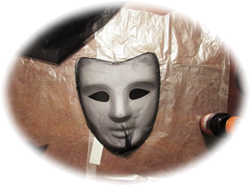 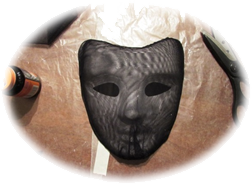 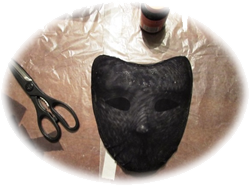 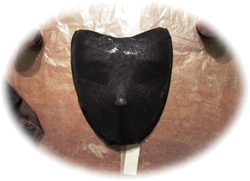 The legs were my next challenge. I wanted them to be flexible and pliable but they also needed to compliment the design and form of my project. To accomplish this feat, I combined four pipe-cleaners in a twisting fashion for each leg and then covered each leg in the pelt of fur I planned on utilizing for the majority of the face. I used rubber cement to fasten the pelt around the pipe-cleaners and secured them with binder clips until they dried, at which time I cut the excess material from each spider leg. 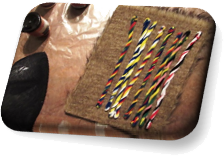 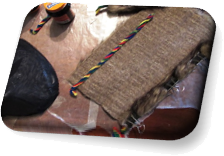 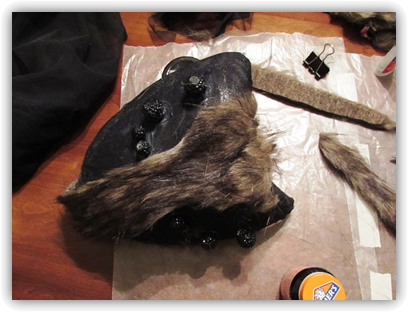 I attached the eyes to the mask before any additional material was added. Trying rubber cement and fabric glue didn’t effectively fasten the beads permanently to the mesh material so super glue was needed to finally secure the spider’s eyes. Four large beads were used to mimic the images of the spiders I had selected, one pair near the mask’s eye sockets and another pair higher on the head. Four smaller eyes were added, two under each eye socket, to complete the effect. 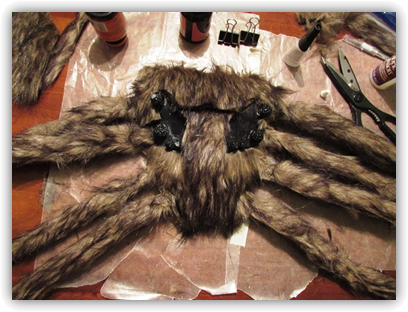 The last stage of construction required covering the majority of the face of the mask with fur while simultaneously, attaching the legs to the outer edges of the piece. I added patches of the pelt, carefully trimmed to fit around the eyes, down the center of the mask. Each leg was attached to the sides of the mask by cutting a slit in the material with an X-acto knife, running the end of the pipe-cleaners through the hole and gluing the opened ends on the inside of the mask. A black pom-pom was added to each leg, effectively capping the leg and providing a simulated foot. The remaining exposed areas of the mask were subsequently covered with pelt as appropriate. Two brown pom-poms were included near the mouth area to resemble mandibles. As a final, compositional effect, the legs were adjusted into appropriate positions.

Her gates stood tall, her fences strong
A guise of faintness worn with pride
Controlling dread thru dominance
Negating what she’d cast aside

Then I saw plainly what she veiled
A smile shielding darker pain
A laugh, a shrug, a careful glance
I knew it well, it knew my name

The walls of shielding built by hands
Who hurt and bleed and scarred from years
Of giving, loving, taking naught
But disdain and forgotten tears

Her fright familiar, left me cold
Still I wondered but could not ask
Of beauty she refused to show
Concealed so far behind the mask

I viewed her mirror and what I saw
Was bold and true, divine and grave
Fierce and daring, gracious, strong
Loving, epic, pretty, brave

While I looked on, it warmed my soul
There was no longer need to ask
Of beauty she could never hide
Revealed from far behind a mask