The Figure/Ground assignment is designed to better understand how the former relates to the latter while utilizing variety, harmony and unity.

By selecting one sketch from the Symbol Grid project, a series of abstracted images will be created that will reflect similar design traits while completing an overall design in a grid pattern.

The relationship between the figure and the ground refers to a viewer’s ability to distinguish an object from its general surroundings. Comparisons between figure and ground share the following generalities:

The final composition will fill a 12”x12” grid, divided by 4” squares in three rows and three columns centered within a 3” border on Bristol board. Tools needed include a ruler, a soft pencil, an X-acto knife, various erasers and permanent markers. 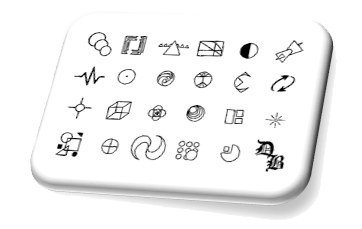 My first step in this project was to decide upon one of the twenty-three symbols from the Symbol Grid assignment to abstract into nine different images. After careful consideration, I choose my icon for transparency.

Next, I sketched several preliminary design concepts for the final figure/ground composition. My plan was to use the inherent created shapes within the cubed design to generate non-figurative contours without deviating from the original object. 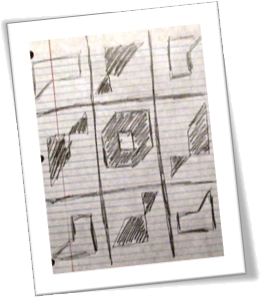 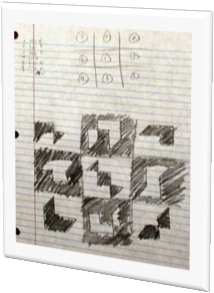 After producing a series of acceptable shapes based on my transparent cube, I wanted to ensure I was evenly distributing the preëxisting components into my new forms. To accomplish this task, I numbered each segmented shape and quantified them, in turn, resulting in seven distinct parts of my cube. This method afforded me with the knowledge that I had initially used an in proportionate amount of my seventh portion and too few of my second and third. By modifying a couple of shapes, I easily rectified the inaccuracy.

The last step in my preparation was to organize my new forms into appropriate and complimentary locations within the predetermined grid formation. I then quickly sketched a draft to visualize the final layout.

To prepare my Bristol board, I measured the exterior dimensions and marked a one inch section to remove from the horizontal edge and a six-inch section from the vertical, resulting in a perfectly square surface to divide into my composition’s grid of 4” squares. By including three rows and three columns, the final design would equal twelve inches squared.

I then removed the pencil marks from the 3” border of my grid with a kneaded eraser and cut the previously marked excess material from the sides of my Bristol board. 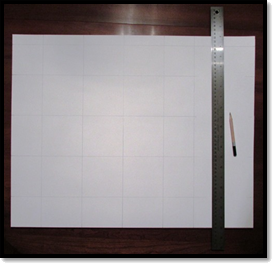 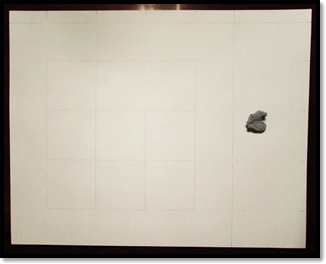 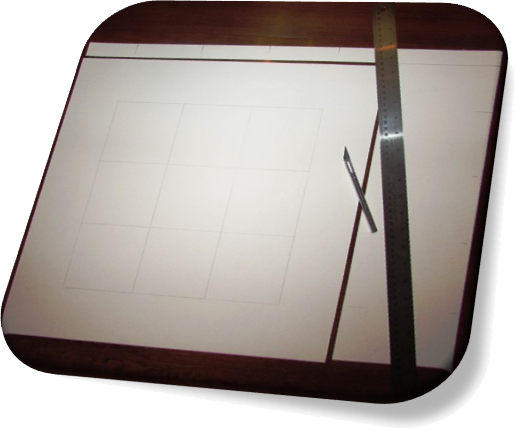 To ensure I would have a size-appropriate original image from which to produce accurate transfers, I recreated my transparency cube within a 4”x4” square in my sketchbook. Using tracing paper, I transferred exact replications of my pre-planned forms based on the specifically combined segments of my transparency cube. 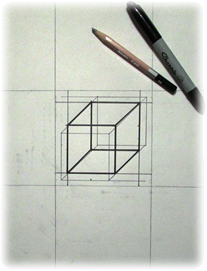 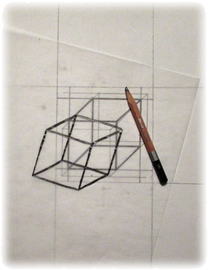 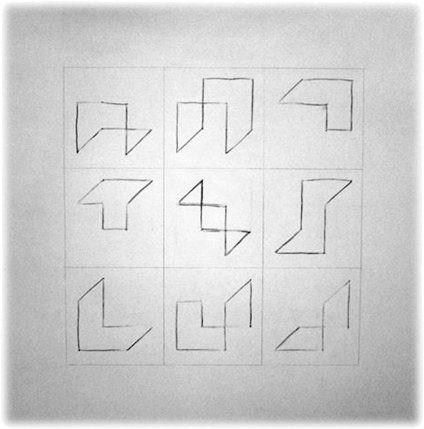 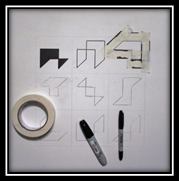 On a side note, every new form is created, not only exactly from the original shape, but in the exact position within its respective square in which it would reside if the complete cube were recreated, in whole.

Chapter eight of Art Fundamentals: Theory and Practice by Ocvirk, Stinson, Wigg, Bone and Cayton dove into many aspects of Space, beginning with spatial perception and the major types of space. Spatial indicators, spatial properties of elements and structured ambiguity were also covered in great detail. The chapter rounded out with three-dimensional applications of space.

Space can be actual or illusionary and refers to the interval, or measurable distance, between points or images. When images are created with a singular point of view they are said to be presented in a two-dimensional format; however, in physical works of art, when actual space exists and is treated as an element, the three-dimensionality is more than an illusion or manufactured point of view.

There are two major types of space: decorative and plastic. Decorative space has a height and width but very little depth; in contrast, plastic space refers to the environment in which objects appear. There are two sub-categories of plastic space and deep, infinite space. Shallow space limits the viewer’s penetration into the pictorial space but deep and infinite space creates a spatial perception that extends well beyond the immediate pictorial surface and contains atmospheric perspective.

There are many spatial indicators to represent space and our comprehension to its depth: detail – both sharp and diminishing, size, position, overlapping, transparency, interpenetration, fractional representation, converging parallels, linear parallels and intuitive space.

Elements have spatial properties and the variations are endless but some of the basics include how space relates to line, shape, value, texture and color.

Structured ambiguity refers to space generated by elements and shapes that are vague and appear to fluctuate between being positive, or figures, and negative, or grounds.

Low relief, or bas-relief, sculptures have spatial limitations; whereas, installations, or architectural settings, beckon the viewer to see the artwork from all angles. These are both examples of three-dimensional applications of space. Four-dimensional space integrates time and motion into the experience of a work of art.

As chapter eight was expansive, Dr. Giampa required five bullet points be developed and I chose to utilize her empathy method to explore the unique characteristics of the types of space, spatial indicators, elemental spatial properties, structured ambiguity and three-dimensional space.

I’m space. Sometimes I’m very shallow and decorative and become flat and contain little depth but other times I seem much more three-dimensional and am considered plastic. When I feel like showing this deeper side of my personality I don’t always show it all at once. I can reveal just a little depth and limit your view into my pictorial space. When I do this I am showing my shallowness and can be compared to a stage with sides and a back wall. If I’m feeling even more generous with my depth, I may become deep or even infinite, letting you see far into an illusionary distance, far beyond my pictorial plane.

My spatial indicators are many and varied. If I want you to see things that appear close to you I make their detail extremely sharp, or I can make them blurry and obscure their details creating the illusion that they are farther away from you. I can also use size to indicate an objects closeness or distance. The smaller the object, the further away it seems; alternatively, the larger an object, the closer you may think it is. If I show you a point of reference, such as a horizon line, and then position objects accordingly, I can provide you with the illusion of my depth based on your real world experiences. I can also overlap objects, obscuring parts of the objects that seem to behind another and I might even use transparency, when you seem to be seeing an object through a closer item, to create various illusions of distance. If you need more help establishing a sense of depth, I can utilize interpenetration, where two objects pass through each other, to produce either an illusion of how shallow or deep I may want to appear. I’ve also been known to do some strange things with fraction representation, in which I combine several spatial aspects in one object or scene. If I use converging parallels to indicate my properties, I angle away from you and one pair of my parallel lines appear to eventually meet. I can also use linear perspective in which I utilize imaginary sight-lines, called guidelines, and extend to a vanishing point, normally at eye level along the horizon line. Below this line there is a ground plane and above it resides a sky plane. The angle from which you view me is considered your location point and is indicated by an imaginary vertical line.

I have many relationships with the elements of design and when I interact with line, or vice versa, movement is implied either toward you, the viewer, or away from you. The types of lines utilized within a composition can also change your perception of me. I work similarly with shapes and how they relate to each other and the environment in which they exist. Value is also an important controlling element for creating illusions of my depth. Light and shadow from the real world are every day experiences, so replicating these values within a pictorial surface will result in similar foreground/background relationships. If I contain sharp, clear or bold textures they may seem to advance while fuzzy, dull and minuscule textures seem to recede. Likewise, contrasting colors can create an illusion of closeness or distance based on warmth, coolness and analogous intensity and hues.

If I become vague or unreadable or the objects within me cannot be determined as figures or ground, I am considered ambiguous and uncertain, or structured ambiguity. Usually, this is an undesirable state and is caused by equivalency where too many elements are so similar there is little or no contrast. To avoid this, size of objects should be varied, the types of values should contrast appropriately, shape types should not all equal each other and a variety of texture, colors and intensities should define positive and negative areas.

I am an illusion in pictorial art; however, in the three-dimensional arts, I actually exist and must be treated as an element. I can be restricted in a linear, decorative manner or represented with great spatial independence. An example of each could be bas-relief sculptures and architectural installations, respectively. If you add time and motion into a work of art I become four-dimensional and evolve as the viewer experiences a design of this type. 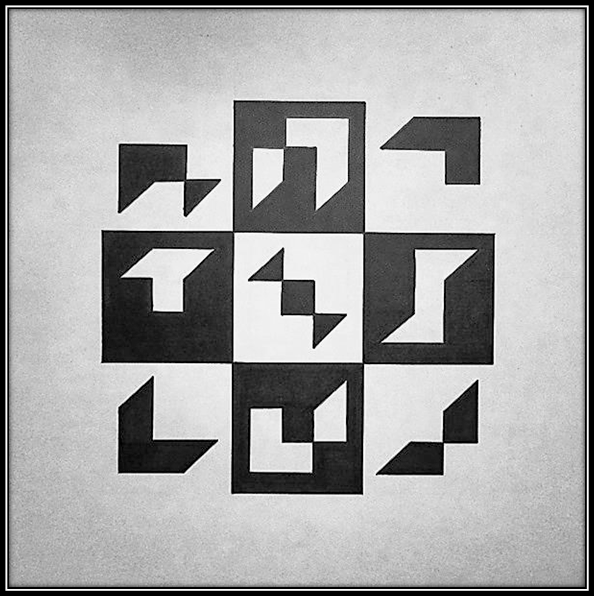