A rebus is an allusion device that uses pictures to represent words or parts of words. It was a favorite form of heraldic expression used in the Middle Ages to denote surnames.

Only utilize visuals to illustrate a chosen phrase like in the style of the Cuneiform.

You can complete this task by creating simple vector pictograms by using illustrator or cut out shapes from printed materials such as from magazines or you may draw by hand with markers.

You are encouraged to be creative with the design. If you choose materials from magazines you need to glue cut-outs to the poster-board. 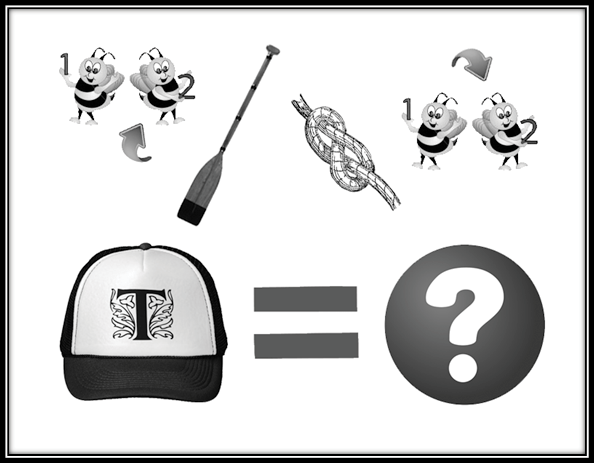 I started by indicating that my bees were labeled one and two then added a paddle, a knotted rope and another pair of bees. I finished my rebus with a hat decorated with the letter ‘T’, an equal sign and a question mark. In each case, the second bee is singled out by an arrow.

To be or not to be? That is the question. ~ Hamlet (William Shakespeare)

Cuneiform script is one of the earliest known systems of writing, distinguished by its wedge-shaped marks on clay tablets, made by means of a blunt reed for a stylus. A cylinder seal is a small round cylinder; typically about one inch in length, engraved with written characters or figurative scenes or both, used in ancient times to roll an impression onto a two-dimensional surface, generally wet clay.

I created my seal from some old clay. So old, in fact, that I needed to moisten it quite a bit to mold it into something usable. Once kneaded into a wet, pliable material, I shaped the clay into a cylindrical form and let it start to dry and set.

When my seal was dry enough to handle but still soft enough to sculpt, I made initial indentations with a linoleum cutter. My symbols included an easel: to represent fine art; a laptop: to signify technology; and a book: obviously, to indicate my love for literature. 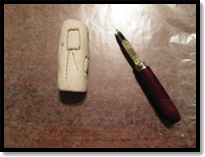 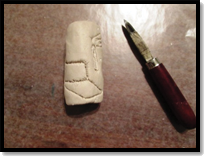 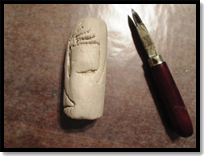 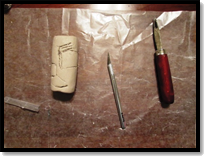 After letting the piece set a little longer, I widened my original grooves with an X-acto knife and added some small details. 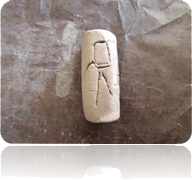 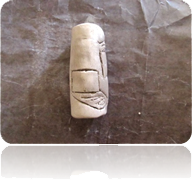 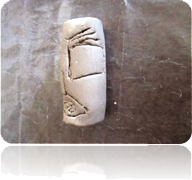 The last element I added was an artist’s symbol which simply consisted of my initials on the top and bottom of the seal. 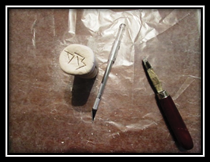