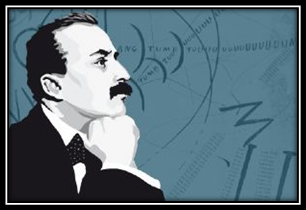 In the early 20th century, a social movement began that changed the perception of the world, art, technology and modern life. It emphasized and glorified speed, the automobile, the airplane and the industrialized metropolis. Youth, violence and revolution were major themes and its founder, Filippo Tommaso Marinetti, promised destruction, war and injustice.

Marinetti (22 December 1876 – 2 December 1944), born in Alexandria, Egypt, was the bastard son of a lawyer, Enrico, and his lover, Amalia Grolli (Berghaus). His affection for literature was developed young and influenced greatly by his mother who was an enthusiastic poetry admirer. He studied in Egypt, Paris and Italy to become a lawyer, like his father, but decided instead to pursue a career in literature. He based his literary work out of France but traveled frequently to Italy and wrote in both languages for an Italian–French magazine in Milan. 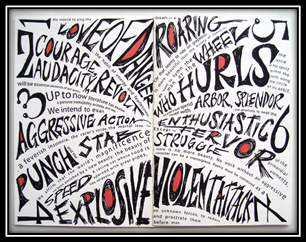 In 1909 Marinetti wrote his Futurist Manifesto which established Futurism as a revolutionary movement which voiced enthusiasm for war, the machine age, speed and modern life. In addition, it shocked the public by proclaiming that they would “destroy museums, libraries, and fight against moralism, feminism, and all utilitarian cowardice.” (Meggs). What Marinetti described as the “first will and testament to all the living men on earth” was bulleted as the following: 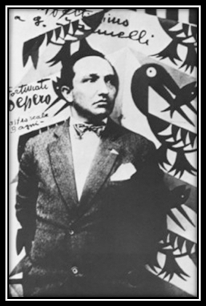 While occupied on creating a collection of poems praising the wartime accomplishments of the Decima Flottiglia MAS (10th Assault Vehicle Flotilla) in Bellagio on December 2nd,1944, Marinetti died of cardiac arrest.

An influential contributor to the Futurism movement was Fortunato Depero (March 30, 1892 – November 29, 1960), an Italian painter, sculptor and writer. He is also well known for his work as a graphic designer and produced a dynamic body of work in poster, typographic and advertising design (Meggs). 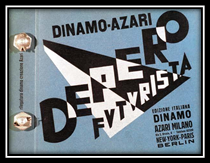 Depero was born in the Italian Trentino region near Fondo and Malosco but grew up in Rovereto, to the south-west. It was in Rovereto that he first began displaying his work as a sculptor while working as an apprentice to a marble worker. Eventually, he made his way to New York and between September of 1928 and October 1930, Depero designed magazine covers for Vanity Fair, Movie Makers and Sparks, among others (Meggs). 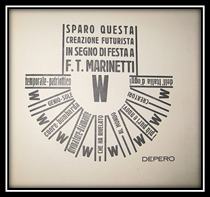 Depero attended Scuola Reale Elisabettina, a school that targeted the development of technical specialization and applied arts, along with other notable artists such as Luciano Baldessari, Fausto Melotti, Umberto Maganzini, Lionello Fiumi, Tullio Garbari and Carlo Belli. It was here that Depero created some of his finest artistic works (Stylepark).

In 1927, Depero published his Depero Futurista, a compilation of typographical experiments, advertisements and tapestry designs. This publication became the precursor of the modern artist’s book. Bound together with two bolts, this tome is considered a manifesto of the Machine Age. Within its pages, even more innovation was waiting to be discovered, such as the use of different typefaces, the text formed into various shapes, the use of different papers and colors, and several other typographic inventions (Colophon). 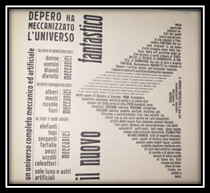 Both Filippo Tommaso Marinetti and Fortunato Depero changed the world of art and social perceptions of their time. Marinetti’s contribution being quite obvious: founding the movement of Futurism and, through his enthusiasm, leading its followers into the future. Despero invented the artist’s book, a creative expression publ shed by the artist independent of the publishing establishment (Meggs). These visionaries, along with many others, are responsible for such further movements including Art Deco, Surrealism, Dada and Constructivism. It is safe to say that Futurism was an influence on the modern art world and all of its decedents!