At the time of this writing, April Greiman is sixty-five years old and has been designing for over thirty-seven years. She has been recognized as one of the first designers to embrace computer technology as a design tool and with popularizing the New Wave approach to typography in the United States originally fathered by Wolfgang Weingart.

Greiman was born in New York City in 1948 and raised in a domestic atmosphere that encouraged her originality, challenged her to question everything and stimulated her aspiration for exploration. She was raised to have a questioning and curious attitude and find adventure in life. Neighbors called her family, “The Flying Greimans” because they were always looking up, searching for interesting phenomena and traveling by air. It is no doubt that young April took a lot from her parents as a young child into adulthood and applied this learned attitude into her work and life (Lutz).

Greiman began her college studies at the Rhode Island School of Design but quickly moved to Missouri in 1966 where she studied graphic design at the Kansas City Art Institute and earned her undergraduate degree in 1970. April continued her studies at the Allgemeine Künstgewerberschule Basel, now known as the Basel School of Design, in Basel, Switzerland between 1970 and 1971 (McCoy). 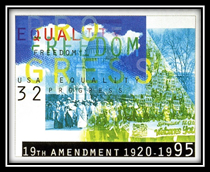 In 1976, Greiman moved to Los Angeles and established her approach of rejecting the belief that computers and digitalization would compromise the International Style by exploiting pixilation and other digital errors as integral parts of digital art. By 1982, she became head of the design department at the California Institute of the Arts and in 1984 Greiman lobbied successfully to change the department name to Visual Communications, as she felt the term “graphic design” would prove too limiting to future designers (AIGA).

Graphic Design Talk said it best when they summarized some of Greiman’s work by saying:

Together with her studio “Made in Space”, she founded ”Gremanski Labs”, which is considered in her own words,” a laboratory dedicated to experiment and exploration.”   Starting with her 1987 Design Quarterly #133 magazine to today public art commissions for the city of Los Angeles, Greiman hasn’t stop searching new ways to present her art. Her work expanded beyond works on paper to a combination of graphic design, video, computer graphics, architecture and environment. 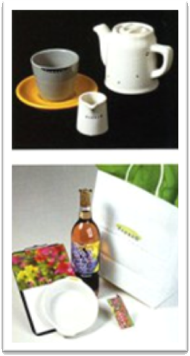 In the early 1970s, Wolfgang Weingart commented, “April Greiman took the ideas developed at Basel in a new direction, particularly in her use of color and photography. All things are possible in America!” (Meggs). Inspired by the New Wave typography which started in the early 1960s, Greiman advanced the application of new and intriguing layout principles while simultaneously creating a bridge to the retro and vernacular designs of the 1980s.

While Greiman made groundbreaking advances to the periodical format by introducing a fold-out layout for posters with her issue #133 of the influential Design Quarterly magazine, her outstanding poster for the California Institute of the Arts truly epitomizes her concept of merging graphic design with photography.

In collaboration with photographer Jayme Odgers in 1979, Greiman revolutionized design by introducing graphic elements within a photographic space; thus, creating a dynamic image with extreme depth and width, allowing objects to occupy peripheral space by the use of wide-angle photography. Typography plays a minimal part in this particular piece, although the readable text is important: the name of the institution and an abbreviation of the same – each placed on the far edges of the design, essentially containing the talent depicted between.

Color is scattered across the image in several primary forms. Flesh tones represent warm reds and yellows while several instances of cool blue appear in sky images. Orange is the only real secondary color that appears on a regular basis. Most of the composition is black, white and shades of gray. The lightest areas almost washout in the white while stark, dark blacks and deep grays make smaller objects stand out and move forward, even from the background of the design. Objects overlap in unrealistic ways, allowing the eye to continuously move from within the image to the border and outside of the composition.

Repeated patterns also establish movement as do the repeated colors. Some individual objects are vertical while others float or are diagonally situated within the image. Square elements balance with round objects and curved lines while jagged edges are tempered by organic features.

Greiman furthered the New Wave movement and continues to influence the perception of typography, graphic design and photography while feeding from past movements and inspiring new styles. Psychedelia was symbolic of the 1960s in America and particularly in California. The form mirrored the anti-establishment attitudes of the age of “sex, drugs and rock and roll.” Psychedelic design found its true format in the Day-Glo poster as it rejected any formal structure. Psychedelia inspired the spirit of many of the New Wave design basics and could be considered a loose predecessor of the movement. Pop Art challenged tradition by asserting that an artist’s use of the mass-produced visual commodities of popular culture is parallel with fine art. Pop removes the material from its original context and isolates the object, or combines it with other objects. Pop art often took as its imagery whatever was currently in use in advertising. Product logos and labels were prominent in the imagery chosen by pop artists such as Andy Warhol. Pop Art and Minimalism are considered to be the precursors to Postmodernism which began as New Wave and is contradictory to the structure of Modernism but, interestingly enough, began with the designers of the Swiss International Style. Post-modernism and New Wave challenged and departed from what was perceived as too much of an emphasis on pure formalism and functionalism. In a postmodern design, typography was pushed beyond its traditional norms of legibility. In the 1980s, Punk was an American graphic style that represented a youthful attempt at rebellion.

It was a manifestation of Postmodernism in which imagery often emulated comic book art (RIT).

April Greiman continuously asks herself some basic questions, such as: “Am I taking enough risk?”, “Do I explore the unknown?” and “Can people learn and grow from what I make?” While the answer to all three seems to be a resounding “yes”, the answer could be different if she wasn’t always wondering those exact queries. April said it best herself by stating, “I’ll always be designing. It’s not what I do, it’s who I am!”