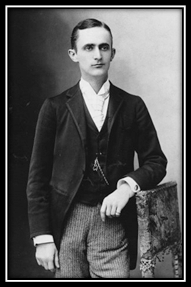 “Eastman is known as the man who brought the joy of photography to millions around the world” (GEH). By introducing the general public to his Kodak camera in 1888, George Eastman gave ordinary citizens the ability to document their lives and experiences with fixed images of themselves and their loved ones. The personal, handheld Kodak camera was an invention without precedent and effectively etched his name in the history books as the father of modern photography. (Meggs)

Eastman was born in Waterville, New York on July 12th, 1854. His father worked two jobs to make ends meet: primarily teaching bookkeeping and penmanship, he also sold fruit trees and roses. By working so many hours and running between Waterville and Rochester, young George was raised mostly by his mother, Maria Kilbourn Eastman. His father died in 1862 and his mother raised him and his sisters alone until 1870 when his older sister, Katie, died of polio. (Lindsay) 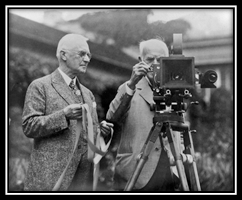 As a young man, Eastman procured a camera for a trip he never took but the event started him on a lifelong love affair with photography. Initially, he found the cost, awkwardness and weight of the photographic outfit needed serious improvements. Eastman started experimented with simple ways to develop negatives involving gelatin emulsions and by 1880 he had invented and patented a dry-plate coating machine.

The Eastman Dry Plate Company was formed in 1881 with the financial backing of Henry Strong, Eastman and Strong. In 1884, they reincorporated as the Eastman Dry Plate and Film Company as they produced and patented rollable film as an alternative to the long-standing, but clumsy, glass negative. 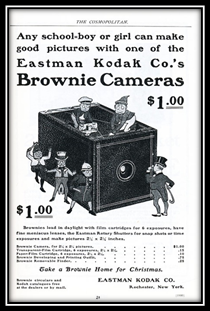 Eastman conceived the word “Kodak” as a distinguishing name that would be considered strong, short and unique. The word would also need to meet foreign trademark laws. In Elizabeth Brayer’s biography of George Eastman, she noted some quotes by Eastman himself describing why he chose the name Kodak for his portable camera:

He liked the letter “K” because it was “strong and incisive… firm and unyielding”. It was pronounced the same in every language, and it was the first letter of his mother’s family name. Registered as a trademark on 4 September 1888, Eastman later explained the word’s merits to the British Patent Office: “First: It is short. Second: It is not capable of mispronunciation. Third: It does not resemble anything in the art and cannot be associated with anything in the art except the Kodak.” (Brayer) 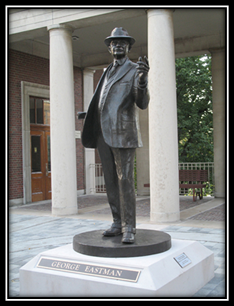 The Eastman Kodak Company was founded in 1892 by Eastman and was one of the first companies to mass-produce standardized cinematography equipment. The Brownie camera was introduced in 1900 and was a modest cardboard box that took small, 2 ¼-inch square pictures. By being so simple and inexpensive, the Brownie was a camera for the masses that anyone could use. Kodak adopted the slogan “You push the button, we do the rest.”, which essentially summed up the uncomplicatedness of its design in a catchy phrase that, in turn, described the process of returning the first cameras back to the company for their film development.

Eastman was a great philanthropist, a successful businessman and an adventurer, at heart. His obvious achievements in the photographic arena and his influence on modern filmmaking and great strides at perfecting photo development would be enough to ensure his place in history; however, Eastman was also generous to a fault. He donated almost $20 million to the Massachusetts Institute of Technology, $625 thousand to the Mechanics Institute (the Rochester Institute of Technology) and roughly $2 million each to the Tuskegee Institute and the Hampton Institute. Near the end of his life, Eastman traveled extensively. Two notable trips were to Kenya in 1926, between March and October, and to Uganda in 1928.

By 1930, Eastman was in considerable pain from a condition diagnosed as a form of degenerative disease affecting his spine and he had trouble standing. Over the next two years, he grew progressively more depressed due to this intense discomfort and reduced capacity to function and on March 14, 1932, Eastman committed suicide with a single gunshot through the heart, leaving a note which read: “My work is done. Why wait?” Eastman was buried at Kodak Park in Rochester, New York on the grounds of the company he founded forty years earlier. 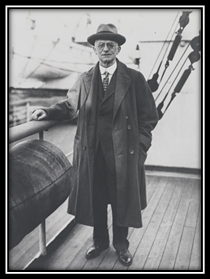 While Eastman considered his work done, his company lives on and has revolutionized the photograph, the negative development, modern filmmaking. From early 1880 when a young George leased the third floor of a building on State Street in Rochester, New York where he began manufacturing dry plates to his invention of roll film, the basis for the creation of motion picture film, five years later, Eastman was destined to change the world of photography. A mere three years later, the first model of the Kodak camera was introduced to the public and it only took Eastman a year to form the Eastman Company A driven visionary, George Eastman pushed the Eastman Kodak Company of New York into the 1990’s by producing the Brownie, color film, instant cameras and digital cameras. (Ackerman)

If it hadn’t been for George Eastman, our world could very well be a much less colorful and documented place to live. Today we enjoy truly instant image reproductions by way of the internet, digital cameras and applications that share our images around the globe in nanoseconds and all of this technology can be traced back to the “father of modern photography” who “brought the joy of photography to millions”.

Lindsay, David. The Wizard of Photography: The Story of George Eastman and How He Transformed Photography. People & Events. n.d. Web. 2 June, 2014. < http://www.pbs.org/wgbh/amex/eastman/peopleevents/pande02.html >.